The winning images of the 2021 Wildlife Photographer of the Year competition are here, and they’re enthralling.

The annual event is organized by London’s Museum of Natural History and recognized as the world’s longest-running and most prestigious nature photography competition. In announcing the winners on Tuesday, the museum said it had received more than 50,000 submissions from 95 countries.

The entries in this year’s competition — the 57th edition — were judged anonymously by a panel of international experts for “originality, narrative, technical excellence and ethical practice.”

“The two Grand Title winners were selected from 19 category winners that celebrate the captivating beauty of our natural world with rich habitats, enthralling animal behaviour and extraordinary species,” the museum explained.

The newest Wildlife Photographer of the Year is French underwater photographer and biologist Laurent Ballesta, whose first-place image was actually years in the making.

It’s called Creation, and captures camouflage groupers exiting a milky cloud of eggs and sperm in a biosphere reserve in Fakarava, French Polynesia. The museum said that Laurent and his team returned to the lagoon every year for five years, “diving day and night so as not to miss the annual spawning that only takes place around the full moon in July.”

Camouflage groupers as a species are endangered by overfishing, the museum noted, though these particular fish are protected within the reserve.Article continues after sponsor message

“This year’s Grand Title winner reveals a hidden underwater world, a fleeting moment of fascinating animal behaviour that very few have witnessed,” said Doug Gurr, the museum’s director. “In what could be a pivotal year for the planet, with vital discussions taking place at COP15 and COP26, Laurent Ballesta’s Creation is a compelling reminder of what we stand to lose if we do not address humanity’s impact on our planet. The protection provided to this endangered species by the biosphere reserve highlights the positive difference we can make.”

The top award in the 17-and-under category went to 10-year-old Vidyun R Hebbar of Bengaluru, India.

His image shows a tent spider upside down in a web, against the bright colors of a passing tuk-tuk in the background. The museum said Hebbar loves to photograph the “often overlooked creatures that live in the streets and parks near his home,” and was first featured in the competition at the age of eight. 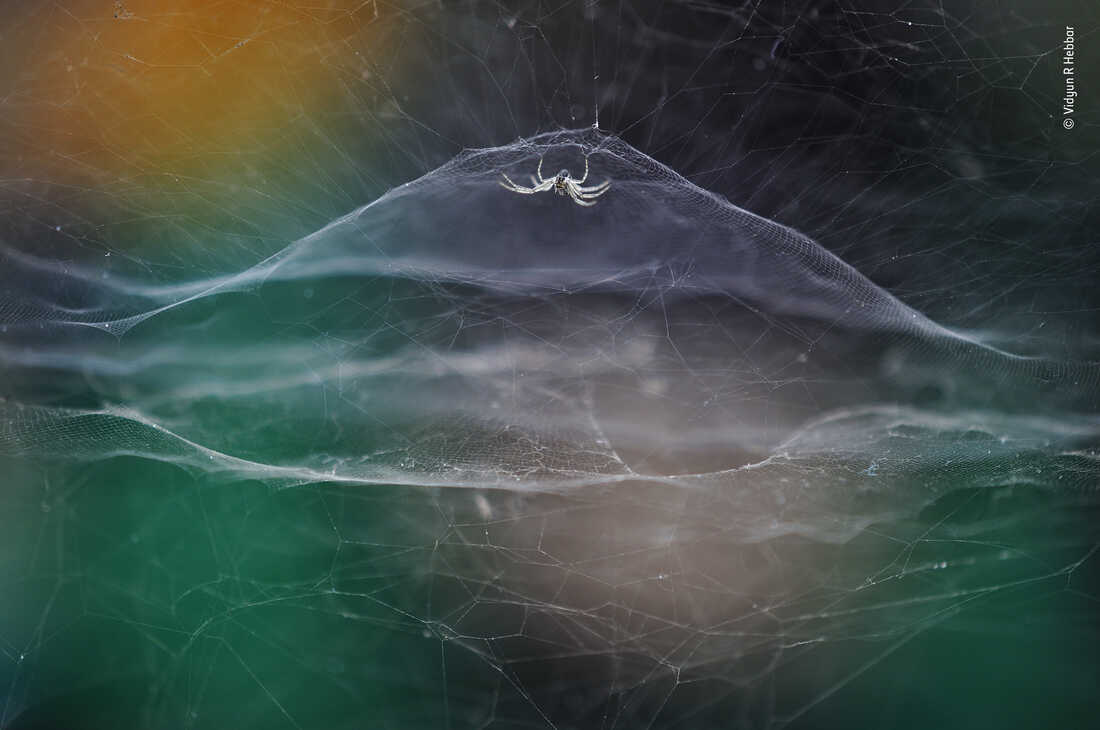 Dome home by Vidyun R Hebbar, India, Winner, 10 Years and Under. Vidyun R Hebbar watches a tent spider as a tuk-tuk passes by. Exploring his local theme park, he found an occupied spider’s web in a gap in a wall. A passing tuk-tuk provided a backdrop of rainbow colors to set off the spider’s silk creation. Tent spiders are tiny; this one had legs spanning less than 15 millimeters.Vidyun R. Hebbar/Wildlife Photographer of the Year

“The jury loved this photo from the beginning of the judging process,” said Natalie Cooper, a jury member and National History Museum researcher. “It is a great reminder to look more closely at the small animals we live with every day, and to take your camera with you everywhere. You never know where that award winning image is going to come from.”

One hundred images from the competition — contextualized with insights from scientists and other experts — will be showcased in lightbox displays at a special Natural History Museum exhibit. It will open in London on Friday, and travel to venues in the U.K., Australia, Belgium, Canada, Denmark, Germany and the U.S. in the coming months.

And for any curious wildlife photographers reading this: The 2022 competition will accept entries starting Monday, and closes on Dec. 9.

Check out some of the stunning images from contest finalists below.

Where the giant newts breed by João Rodrigues, Portugal, Winner, Behaviour: Amphibians and Reptiles. João Rodrigues is surprised by a pair of courting sharp-ribbed salamanders in the flooded forest. It was Rodrigues’ first chance in five years to dive in this lake as it only emerges in winters of exceptionally heavy rainfall, when underground rivers overflow.João Rodrigues/Wildlife Photographer of the Year

Head to head by Stefano Unterthiner, Italy, Winner, Behaviour: Mammals. Stefano Unterthiner watches two Svalbard reindeer battle for control of a harem. Unterthiner followed these reindeer during the rutting season. Watching the fight, he felt immersed in “the smell, the noise, the fatigue and the pain.” The reindeer clashed antlers until the dominant male (left) chased its rival away.Stefano Unterthiner/Wildlife Photographer of the Year

Bedazzled by Alex Mustard, UK, Winner, Natural Artistry. Alex Mustard finds a ghost pipefish hiding among the arms of a feather star. Mustard had always wanted to capture this image of a juvenile ghost pipefish but usually only found darker adults on matching feather stars.Alexander Mustard/Wildlife Photographer of the Year

Reflection by Majed Ali, Kuwait, Winner, Animal Portraits. Majed Ali glimpses the moment a mountain gorilla closes its eyes in the rain. Ali trekked for four hours to meet Kibande, an almost-40-year-old mountain gorilla. “The more we climbed, the hotter and more humid it got,” Ali recalls. As cooling rain began to fall, Kibande remained in the open, seeming to enjoy the shower.Majed Ali/Wildlife Photographer of the Year

Face-off, from Cichlids of Planet Tanganyika by Angel Fitor, Spain, Winner, Portfolio Award. Angel Fitor provides an intimate look into the lives of cichlid fishes in Lake Tanganyika. Two male cichlid fish fight jaw to jaw over a snail shell. Inside the half-buried shell is a female ready to lay eggs. For three weeks Fitor monitored the lake bed looking for such disputes.Angel M. Fitor/Wildlife Photographer of the Year

Nursery meltdown by Jennifer Hayes, USA, Winner, Oceans: The Bigger Picture. Jennifer Hayes records harp seals, seal pups and the blood of birth against melting sea ice. Following a storm, it took hours of searching by helicopter to find this fractured sea ice used as a birthing platform by harp seals. “It was a pulse of life that took your breath away,” says Hayes.Jennifer Hayes/Wildlife Photographer of the Year

Cool time, from Land time for sea bears by Martin Gregus, Canada/Slovakia, Winner, Rising Star Portfolio Award. Martin Gregus shows polar bears in a different light as they come ashore in summer. On a hot summer’s day, two female polar bears took to the shallow intertidal waters to cool off and play. Gregus used a drone to capture this moment.Martin Gregus/Wildlife Photographer of the Year

The intimate touch by Shane Kalyn, Canada, Winner, Behaviour: Birds. Shane Kalyn watches a raven courtship display. It was midwinter, the start of the ravens’ breeding season. Kalyn lay on the frozen ground using the muted light to capture the detail of the ravens’ iridescent plumage against the contrasting snow to reveal this intimate moment when their thick black bills came together.Shane Kalyn/Wildlife Photographer of the Year

Road to ruin by Javier Lafuente, Spain, Winner, Wetlands – The Bigger Picture. Javier Lafuente shows the stark, straight line of a road slicing through the curves of the wetland landscape. By maneuvering his drone and inclining the camera, Lafuente dealt with the challenges of sunlight reflected by the water and ever-changing light conditions.Javier Lafuente/Wildlife Photographer of the Year